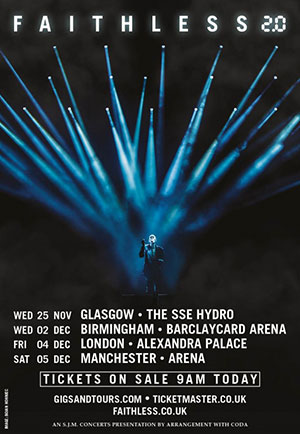 Faithless have announced a short run of UK tour dates in support of the band's forthcoming 20th anniversary remix album. The legendary dance act will perform shows in Glasgow, Birmingham, London and Manchester in November and December 2015.

The special remix album, Faithless 2.0, is due for release in October 2015 and marks 20 years since the band was formed.

Faithless will perform the following shows during the 20th anniversary UK tour:

Tickets for the Faithless 20th anniversary UK tour will go on general sale at 9am on Friday 7th August, and will be priced from £35 plus booking fees. Tickets will be available from Ticketmaster.co.uk and other ticket agencies.