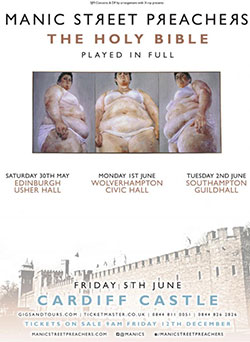 Manic Street Preachers have announced a second run of 'The Holy Bible' live shows, following huge demand for the first run of shows. The Manics will now perform the classic album at venues in Edinburgh, Wolverhampton, Southampton and Cardiff in May and June next year.

The first run of shows (8th - 17th December) was planned to mark the 20th anniversary of the band's classic album, The Holy Bible, and tickets sold out almost immediately after going on sale. That anniversary tour will now continue into 2015 with the new shows announced today – including a very special outdoor show at Cardiff Castle.

Manic Street Preachers will perform 'The Holy Bible' live on the following dates in 2015: