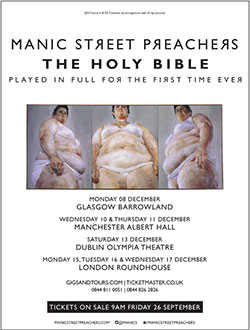 Manic Street Preachers have announced a series of shows to mark the 20th anniversary of their classic album The Holy Bible. The Manics will perform the album in full at venues in Glasgow, Manchester, Dublin and London this December.

The Holy Bible was released in August 1994, and was the band's last album before the disappearance of lyricist and rhythm guitarist Richey Edwards. The album was critically acclaimed and, to date, has sold over 600,000 copies worldwide.

Manic Street Preachers will perform The Holy Bible in full at the following venues in December:

Tickets for 'The Holy Bible' shows will go on general sale at 9am on Friday 26th September.