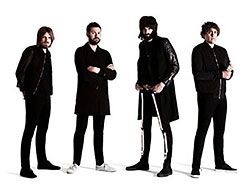 Kasabian's fifth studio album, 48:13, was released in June 2014 and went straight to the top of the charts, becoming the band's fourth consecutive UK No.1 record.

Kasabian completed a tour of the UK's biggest arenas in November and December 2014, with support from indie rock band The Maccabees.