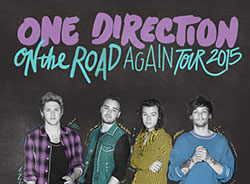 Boy band sensation One Direction formed during the seventh series of The X Factor. The boys had entered the contest as solo singers, but during bootcamp they were asked by Nicole Scherzinger to form a band, which then went on to reach the final.

One Direction's first UK arena tour took place from February to April 2013 and was known as the Take Me Home Tour. The boys were supported by Camryn and 5 Seconds of Summer on this tour.

The boys then performed several huge stadium gigs in May and June 2014, during the Where We Are Tour. Once again, 5 Seconds of Summer provided the support on this tour.

One Direction last toured the UK & Ireland in September and October 2015, during the band's On The Road Again Tour 2015. They were supported by singer-songwriter Jamie Lawson during the tour.