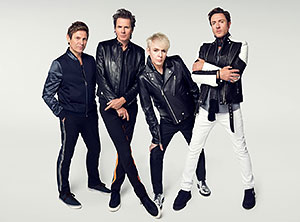 Duran Duran is one of the most successful British bands to have emerged during the 1980s. With massive hits such as The Reflex, The Wild Boys and A View to a Kill, Duran Duran swept all before them as their popularity spread worldwide.

During their 30+ years in the music industry, Duran Duran have sold more than 100 million records and have topped the charts on both sides of the Atlantic.

Duran Duran went on a UK tour in November and December 2015. The tour was in support of the band's 14th studio album – Paper Gods.