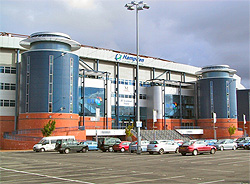 Hampden Park is Scotland's national stadium and is located in Glasgow. It is primarily known as being the home to Queen's Park Football Club although it is used to host other sporting events and concerts. Hampden Park was used as the main athletics stadium for the 2014 Commonwealth Games.

Scottish singer-songwriter Gerry Cinnamon will play a huge homecoming concert at Hampden Park in the summer of 2020.

Gerry Cinnamon will play a massive homecoming show during the summer of 2020. The Scottish singer-songwriter will play live at Glasgow's Hampden Park on Saturday 18th July in what will be his biggest headline gig to date.