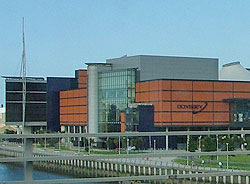 Belfast's SSE Arena (formerly Odyssey Arena) was opened in 2000 and forms part of a large sports and entertainment complex on Queens Island. With a capacity of 11,000 the SSE Arena is the largest indoor arena in Northern Ireland.

The SSE Arena is also home to the Belfast Giants ice hockey team, who play in the Elite Ice Hockey League.

Jeff Lynne's ELO will play a series of arena shows across the UK & Ireland during the autumn of 2020. The legendary band will play live at Belfast's SSE Arena on Sunday 18th October as part of the From Out Of Nowhere Tour.

Boy band JLS will reunite for a huge comeback tour in 2020. Aston Merrygold, Ortise Williams, Marvin Humes and Jonathan 'JB' Gill will perform together at Belfast's SSE Arena on Friday 13th November as part of their Beat Again Tour.