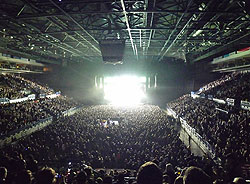 The Sheffield Arena was opened by the Queen in 1991 and was initially used to host the World Student Games. Since then it has gone on to host many of the world's biggest music acts including U2, Bon Jovi, Bruce Springsteen, Robbie Williams and Beyonce among others. This versatile arena offers a capacity ranging from 3,500 (for theatre-style shows) to 13,500 (for larger productions).

Sheffield Arena entered into a 3-year naming partnership in September 2017 with Doncaster Sheffield Airport. Henceforth, the arena will be known as the FlyDSA Arena.

Stormzy has a massive world tour planned for 2020 in support of his new album Heavy Is The Head. The Brit Award-winning rapper will play live at Sheffield's FlyDSA Arena on Wednesday 16th September as part of his H.I.T.H World Tour.

Boy band JLS will reunite for a huge comeback tour in 2020. Aston Merrygold, Ortise Williams, Marvin Humes and Jonathan 'JB' Gill will perform together at Sheffield's FlyDSA Arena on Friday 20th November as part of their Beat Again Tour.