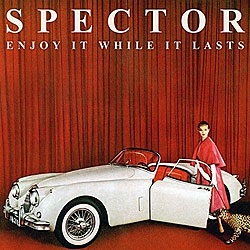 Album Review: Spector - Enjoy It While It Lasts

Here is the debut album from London indie rock band Spector. The five piece outfit was formed in 2010 by 24 year old vocalist and guitarist Fred Macpherson, a cocksure frontman who certainly divides opinion. Enjoy It While It Lasts was never going to live up to his hype, but is it any good?

Fred is not a newcomer to the music business. He has been in two previous bands, Les Incompetents and Ox.Eagle.Lion.Man, releasing some singles and EPs along the way, without much success. However the formation of Spector does promise much more. The band has a very clear and quirky image, wearing sharp suits and Fred sporting his statement thick rimmed glasses. This all seems to have been carefully put together and the difficult trick is to avoid ending up all style and no musical substance.

Remarkably, Spector appeared on Later...with Jools Holland in November last year when all they had issued was a single, and the album was still months away. The performances of What You Wanted, Chevy Thunder and Not Fade Away (all on the album) were excellent and created a lot of interest in the band.

Musically the band falls into the indie rock slot but with an 80s retro feel, the instruments played being guitars, bass, drums and synth. They have been likened to the Killers, Razorlight and The Strokes. Listening to the album I was immediately reminded of Orchestral Manoeuvres In The Dark. In places the overall sound is similar to OMD and Fred often seems remarkably like Andy McCluskey. I don't think this is deliberate and in any event is no bad thing, OMD being one of the best, and most overlooked, of the British New Wave groups of the 80s.

The album contains twelve songs all either written or co-written by Fred. There are six producers including the ever excellent Trevor Horn on two tracks. The production is patchy across the album and should have been better; this is not going to win any hi-fi awards. Celestine by Trevor Horn is the production highlight.

The songs are catchy and to some extent lightweight, but that matches the persona of the band. Spector is about showmanship as well as music. Best tracks are Chevy Thunder, Friday Night Don't Ever Let It End and Never Fade Away, the latter being an anthemic song that will become the group's signature theme for live performances.

Enjoy It While It Lasts is indeed enjoyable. It went to No: 12 in the UK album charts. The critical reception was mixed to say the least. It seems that many were either seduced by the hype and inevitably left disappointed, or were openly hostile to Fred. This seems unfair. As an album of good, catchy indie music with a retro twist this works very well. We can enjoy and hopefully Spector will last.