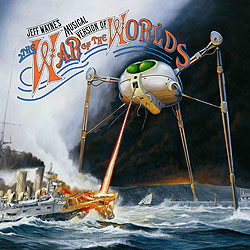 With a completely new version of this concept album being recorded for a November 2012 release, perhaps now is a good time to look at the original edition that first came out in 1978. Has it stood the test of time or does it really need to be 're-imagined'?

Jeff Wayne is a musician and composer. He had written many advertising jingles, and composed the score for a successful West End musical, before he released his War Of The Worlds concept album. It became an immediate hit and went on to achieve position 40 in the all time top selling albums in the UK chart compiled in 2009.

The work is based on the 1898 novel by H. G. Wells, a book in two parts i.e. Book One: The Coming of the Martians, and Book Two: The Earth under the Martians. The story is told from the viewpoint of the narrator, a journalist, and starts when a large cylinder lands at Horsell Common near London. The cylinder opens and the Martian creatures inside climb out. They use a heat ray to incinerate all humans nearby and then assemble huge tripod-like fighting machines. They obliterate our approaching army and march on London. During the mayhem the narrator and his family become separated. With more cylinders landing in England the population of London tries to evacuate. The Martian tripods continue to attack using deadly black smoke and by spreading a red weed which rapidly covers everything in its path.

Book Two concerns the aftermath of the initial invasion. The narrator tries to reach London to find his wife and is involved in various incidents along the way. Just when things seem hopeless the Martians suddenly die off, having become sick with bacterial infections to which they do not have immunity. Eventually the narrator is safely reunited with his wife.

Jeff Wayne uses the character of the narrator to do exactly that, narrate the story against a musical background. This is broken up by songs and speech from other people in the novel. Book One covers one side of a CD and Book Two is on the second CD. The stroke of genius was to persuade the actor Richard Burton to read the part of the narrator. The late Richard Burton possessed the finest speaking voice of his generation, and some would say ever. He provides the perfect blend of gravitas and drama to engage the listener and move the proceedings along.

Other vocalists to feature are Justin Hayward, David Essex, Phil Lynott, Julie Covington and Chris Thompson who have songs to sing and lines to speak. They acquit themselves well.

The musicians are a stellar cast of the best of session players of that era e.g. Herbie Flowers, Chris Spedding, Jo Partridge, Ray Cooper, and Ken Freeman on various synthesizers. Jeff Wayne wrote the music and some of the lyrics with the remainder being written by Gary Osborne. The end result is a mixture of orchestral and rock music which ebbs and flows to suit the storyline, with sound effects and weird noises to illustrate the sci-fi nature of Wells's tale. CD1 is particularly exciting as it follows the landing and invasion. CD2 is calmer in dealing with the spread of the red weed and the dying of the Martians. Throughout there are tremendous themes and riffs to hold the story together.

Overall it is a magnificent achievement. It is a scintillating musical journey through a skilfully truncated version of the book. It has stood the test of time well and does not sound dated. Its continued popularity testifies to that.

Jeff Wayne continued to write and produce music. In 1992 he tried to repeat the success of War Of The Worlds by releasing a double album called Spartacus, but it failed. More recently he has been staging a live arena version of War Of The Worlds using an orchestra, guest singers, a holographic head of Richard Burton and other impressive props. It is well worth seeing and new concerts are scheduled for later this year.

Now we are told that the album is being re-recorded in a revised form (The New Generation) with Liam Neeson as the narrator. Will replacing the Richard Burton narration with another actor's voice be a fatal mistake? We will keep an open mind and BigLiveActs.co.uk will review the new album when it becomes available. In the meantime, if you have never heard Jeff Wayne's War Of The Worlds then seek out a copy. It really is a classic album and the opening 60 seconds is one of the finest intros you will ever hear.