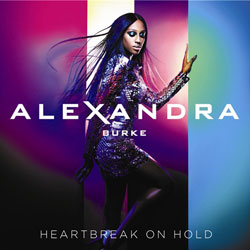 It's been well over 2 years since Alexandra Burke topped the charts with her debut album Overcome. During that time Alexandra has completed her first headline concert tour, signed a £3M recording contract with RCA, and while in Los Angeles she attended a song writing camp. The result is her new album Heartbreak On Hold.

It has been reported that during the writing camp Alexandra completed 3 songs a day for 2 weeks. The results could not have been spectacular because of the 12 songs on the new album just 2 have been written by Alexandra. I counted a total of 12 producers in the album credits and featuring such names as Mike Spencer, Cutfather, David Vendetta and DJ Smash. Alexandra Burke is listed as Executive Producer.

I have commented before that when making an album it is often a case of too many cooks spoiling the end result. Maybe that is why this album, although perfectly competent in what it does, fails to inject any personality into the sound, which can best be described as electro europop/dance. If you have heard Madonna's MDNA album then you will have a fair idea of the overall direction of this one.

Most of the tracks are driving electronica with highly processed vocals. The songs are not memorable and probably the best are the 2 singles i.e. Elephant and Let It Go. The album ends with a piano ballad, What Money Can't Buy, where Alexandra does at last have a chance to show a more considered side to her singing.

Certainly the album is not as enjoyable or strong as Overcome but will no doubt appeal to the fans and anyone else wanting a bang up-to-date dance album. However I think that the third album should feature a more varied mix of songs and styles where Alexandra can explore her vocal talents. Also she should work with one producer and try to create her own signature sound. Her time on The X Factor in 2005 showed us that she has an excellent voice which I feel has been swamped and depersonalised by her many producers.