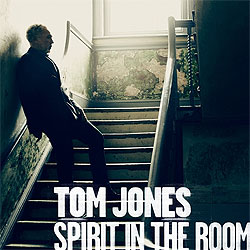 Following the huge success of his 2010 album Praise & Blame Tom Jones has just released a new one called Spirit In The Room. Once again Tom has worked with producer Ethan Johns (son of the producer Glyn Johns) and the end result is very similar, stripped back readings of mainly other peoples songs. If you liked Praise & Blame you will like this.

Over the years Tom has taken us on quite a journey. Starting off as a powerhouse Welsh rocker with Tommy Scott & The Senators he recorded with the legendary Joe Meek. After being discovered by manager Gordon Mills Tom's career took off, with the Mills composition It's Not Unusual becoming a world wide hit.

Several hits followed and as things eventually started to cool down Gordon Mills reinvented Tom as a crooner. When Tom Jones moved to live in America he became a Las Vegas show performer. Hit TV shows kept him on the international stage but by the 1980s Tom's success had begun to fade.

Gordon Mills died in 1986 and the job was taken over by Tom's son, Mark Woodward, who set about re-inventing Tom and making him more current. Albums were made with hip young producers. In 1999 the album Reload was a huge seller and introduced Tom to a younger audience.

There was a change in direction in 2008 with the superb album 24 Hours, a 60s and Motown sounding set of rock/souls songs which stands as one of his best ever recordings. Two years later it was followed by Praise & Blame, a very different project which saw a move to understated arrangements and intimate soulful singing. Not everyone's cup of tea but a big hit nonetheless.

Now Spirit In The Room continues in much the same mould. It starts off with Leonard Cohen's Tower Of Song and this is a wonderful version, particularly poignant when Tom sings “I was born with the gift of a golden voice.” A quiet and intimate vocal with a sparse but effective backing make this a great opener.

Most of the album displays a restrained vocal style and shows that Tom Jones is far more than a powerful rocker. He is ably supported by the backing music which is simple and consists mainly of guitar, drums, bass and piano. Full marks to Ethan Johns for not swamping the vocals. Also full marks for the production which is immaculate with excellent use of the stereo soundstage.

The only track which does not work for me is Bad As Me by Tom Waites. It is one of the few uptempo songs but the backing is a bit of a raucous mess and detracts from Tom's singing.

The Low Anthem song Charlie Darwin is another standout track, featuring a choral backing which really brings out the beauty of the piece. Dare I say it, this is better than the much loved original.

The CD is available in a limited edition digipack which I would recommend because it has 3 extra tracks over the standard issue, 2 of which are very interesting. Lone Pilgrim is an old blues song which was done by Bob Dylan on his album World Gone Wrong. Tom Jones's version is very different and one of the best on this album. The other song is When The Deal Goes Down which was written by Bob Dylan and appeared on Modern Times. Again this version is different to Dylan's and is simply sublime, for me the best track on the album.

You will listen to Spirit In The Room and wonder if this is the same singer as the one that belted out all those hits years ago. Yes it is, and with age has come a mature, controlled and soulful voice that at times leaves you speechless.

Finally, if Tom Jones reads BigLiveActs.co.uk and wants some free advice, I can tell him this: for your next project record an album of Bob Dylan songs. On the evidence so far you are a great interpreter of his work.