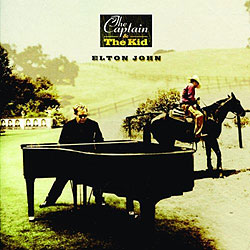 To date Elton John has made 29 solo studio albums. The first was Empty Sky in 1969. The Captain & The Kid is the latest, having been released in 2006. In between there have been a number of great albums, mainly in the early years, which are now considered classics. A pleasant surprise that at the age of 59 he should produce another one of this standard.

Incidentally, for those of you who know of Elton John simply from his many hit singles I would suggest that you take a crash course in investigating his musical past. For starters you could seek out albums such as Madman Across The Water, Goodbye Yellow Brick Road, Captain Fantastic and Blue Moves and prepare to be amazed. The quality and variety of the songwriting and the musical backing is nigh on breathtaking. From 1970 to 1976 Elton made 10 albums and was on a creative run equalled only by The Beatles.

To appreciate this latest album fully you need to go back to the 1975 album Captain Fantastic & The Dirt Brown Cowboy. That was an autobiographical album, the songs dealing with the early struggles of Elton and Bernie Taupin, his lyricist, to make it in the music business. The songs on the album are exceptional e.g. Someone Saved My Life Tonight dealing with Elton's attempted suicide following his engagement (subsequently called off following advice from Long John Baldry, the “someone” in the song title) to Linda Woodrow. This was the only track released as a single and was almost 7 minutes long. The album was a huge seller and is probably Elton's best.

30 years later and Elton and Bernie decided to write a sequel to bring their story up to date, hence The Captain & The Kid. This is of course a tricky move. Can the magic and quality of the earlier album be maintained? Indeed, should you try to turn back the clock or should you keep moving on? Time has passed by and Elton and Bernie are older now. So are their fans, who cherish the glory days and still listen to the early albums, now on remastered CDs rather than scratchy old vinyl. Going back is a dangerous game which often results in disappointment.

However, any fears about this album were immediately banished when it was released.  It very successfully recalls the 1975 album without in any way trying to copy it. The songs deal with the intervening years and cover the duo's hopes, successes, frustrations, failures, drug problems and  eventual recovery and triumphs. The songs are shorter and the overall sound is more piano based with less guitar evident this time round. Elton's voice has matured and is now deeper and has an attractive raspiness. Song styles vary and include rock, blues, country and ballad. Fortunately the song writing standard is high, both lyrically and musically.

Some notable tracks are:

Postcards From Richard Nixon, the album opener. This starts with some great blues piano playing and leads into a rocker about Elton and Bernie arriving in America like wide eyed innocents and finding their feet. “In a bright red Porche on Sunset, I saw Steve McQueen, I guess he's just about the coolest guy I've ever seen.”

Tinderbox. Overall I think this is the highlight of the album. A ballad with a spine tingling echoey choir in the background. This is about the fact that even the best of friends don't always get along. An Elton/Bernie classic, up there with their best.

And The House Fell Down. A song about the collapse of life when in the grip of a drug habit. Searingly honest and painful: “With a rolled up note I'm hovering on that line, Three days on a diet of cocaine and wine, And a little weed just to level me sometime, I've put the clock in the drawer 'cause I've cancelled out the time.” This is sung to a rocking bluesy piano and chorus and is another great number.

Old 69. An infectious tune and a song about two old friends getting together to talk about old times. “Hey how about this, A little conversation tonight, Thinking about how we struggled to find, Our place in the dizzy heights.”

The Captain & The Kid. The closing track. The intro and outro are deliberately reminiscent of the theme from the title track of the 1975 album. The song is a catchy rocker and is a summing up of the duo's career. Ironically the song contains the line “And you can't go back and if you try it fails.” Well, as far as this album is concerned I think they proved that you can!

The album was not a great commercial success, reaching 6 in the UK album chart and just 18 in America. Elton John complained about poor promotion by the record company. I suspect the truth is that this kind of music is not going to appeal to the younger audience of music buyers today whereas Elton's fans viewed it as a great return to form.

At the time of release Elton said that he saw this album, together with Captain Fantastic, as bookending his career. This suggested that he would not make another solo album and would concentrate on musicals and collaborations. If that is the case then his solo recording career has gone out in the best way possible, on a high.