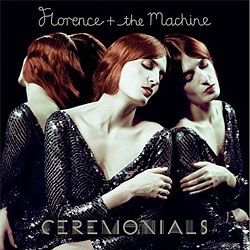 We are a little late in reviewing this album. It has already been to the the top slot in the album charts (and is currently No. 10) and has recently been nominated in the BRIT Awards 2012 category of Best British Album Of The Year. Now, does it justify this early success?

Ceremonials is the second album from Florence and the Machine, following the highly successful Lungs in 2009. The new album is an altogether more sophisticated affair. Whereas Lungs was an indie band concoction Ceremonials is a huge production. The sound is Kate Bush meets Enya and Bjork; thudding drums, heavy bass, towering vocals, backing choirs and a gothic, eerie, if not downright menacing, feel.

The producer is Paul Epworth who has worked with Adele and who was one of the producers on Lungs. There are 12 songs on Ceremonials and all were written by Florence Welch, with co-writers on 10 of them, mainly Paul Epworth. The album is 56 minutes long, giving an average time of over 4.5 minutes per song, which is quite long.

Well, let's look at the songs in running order:

Only If For A Night. A strong opener which sets the tone for the rest of the album. Thudding drums, heavy bass, choristers, chimes and Florence's sometimes near-manic vocals. A heady brew straight out of the Kate Bush sound manual, and none the worse for that.

Shake It Out. The second single from the album. Sound wise this is more of the same. The lyrics proclaim "it's always darkest before the storm" and the music provides heavy, dark chords to match.

What The Water Gave Me. The first single from the album and the longest track. A very attractive song which starts quietly and almost manages to stay under control. The wall of sound is mostly resisted although the chorus does speed things up. The track is driven along by the bass line.

Never Let Me Go. A slight change of style with electric piano and big choruses but not a strong song.

Breaking Down. No question about it, this is a great song. Interestingly it was written by Florence alone. Features electric piano, strings and huge multi-tracked voices to move it along. Florence's voice is close miked on the quieter parts so that it sounds as though she is in the room with you. Altogether a superb effort.

Lover To Lover. The other self-penned song and it's another good one. The arrangement is superb and exciting.

No Light, No Light. This is the third single. Again thudding drums, droning bass line and big backing vocals move this along nicely. Good vocal from Florence but not the strongest song here.

Seven Devils. Another great song. A gothic heart to this one. A catchy chorus of big female voices over a thundering crash of chords and bass. Wonderful.

Heartlines. A lighter sound for the first half after which the big noise piles in. Not a strong song and it all sounds a bit familiar.

Spectrum. This is a bit like Heartlines Part 2. The same galloping tempo and an even more frantic chorus. At this point there are signs that musical inspiration is running out.

All This And Heaven Too. An example of how an ordinary song can be raised up by an effective arrangement, a trick used in other places on the album. Effective use of the female choristers.

Leave My Body. It does follow the well established formula, thus there are no surprises here.

Paul Epworth has delivered a big production with good use of the stereo soundstage. I have seen criticism of the overuse of compression on the download album. I have listened only to the CD and compression is to be heard. I think that has been done to give the album its distinctive sound which lies largely in the midrange.

Overall this is a good album but it suffers a little from having the same approach throughout. A bit of variety would have added listening interest over the almost one hour running time. As a homage to Kate Bush it is very effective, but to avoid being labelled copyists Florence and the Machine will have to change gear for the next album. Does it deserve to be nominated for a BRIT award? Probably.