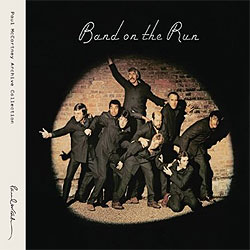 Following his time in The Beatles, Paul McCartney went on to have almost as successful a time with his band Wings and subsequently as a solo artist. At 69 years of age he still records and tours more enthusiastically than most musicians half his age. What's more the quality has been maintained throughout. A remarkable achievement.

This year has seen the start of a re-issue campaign of his back catalogue. The first album to receive this treatment was Band On The Run by Wings from 1973, followed by McCartney from 1970 and McCartney II from 1980. Apparently more will follow including the wonderful 1971 album Ram.

These re-issues have been remastered at Abbey Road Studios and are being produced in several versions e.g. Band On The Run is available in physical format as a single CD, a 2 CD and 1 DVD set, and a box set of 3 CDs and 1DVD. Whether you want the additional material over and above the original album is a matter of choice, but for once there is some interesting stuff here. However the old videos on the DVD are not of very good quality. Packaging is smart comprising cardboard fold out digipacks.

The whole of Paul McCartney's post Beatles output was digitally remastered and released on CD in 1993. The sound quality was excellent and remains one of the best remastering jobs from that era. Band On The Run was remastered again and re-issued in 1999 in a special 25th anniversary edition.

There cannot be many people on this earth who have not heard at least some of the tracks from this album. Band On The Run, Jet and Bluebird are often played on the radio and are a part of Paul McCartney's live repertoire. The album is a multi-platinum seller and is now regarded as a classic although some critics remain sniffy about it.

The album tracks were recorded in Lagos and completed at Abbey Road. The musicians in Lagos were Paul and Linda McCartney and Denny Laine. The scheduled drummer dropped out at the last minute and Paul played the drums on the recordings. Saxophone solos were added by Howie Casey at Abbey Road. Thus it was a simply recorded album without any fussy instrumentation, which suited the songs perfectly.

There are 9 songs on the album and there isn't a filler among them. We have the usual McCartney mix of rock, ballad and fun and all are infused with the melodic content for which he is known. The album starts off with 2 stormers, Band On The Run and Jet, and then goes into the beautiful ballad Bluebird. That is followed by my own favourite track, Mrs Vanderblit, which is truly infectious. I defy you to sit still through it!

Of the remaining songs I think Picasso's Last Words (Drink To Me) deserves a mention. This was written when Dustin Hoffman challenged Paul McCartney to write a song about a current news item, in this case the report of Picasso's passing. The result is one of those songs that Paul McCartney does so well, taking several different ideas and working them into a single song. (For a stunning example of this technique check out Uncle Albert/Admiral Halsey on the album Ram.)

Band On The Run is a very satisfying album, comprising 9 good songs with simple and direct performances. Paul McCartney has fingers in several musical pies and his albums are often hard to classify. But great music is great music whatever you call it, and this album has stood the test of time very well indeed.

Finally, what of the latest remastering? Well, frankly, there is little difference between this and the previous remasters, the 1993 ones having been well done in the first place. If you are a fan then you will want to buy these new editions for the extra material and not for any great leap in sound quality.