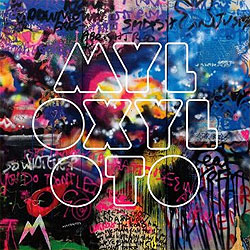 Mylo Xyloto is Coldplay's eagerly awaited fifth studio album since Parachutes was released in 2000, when the band achieved instant success. The subsequent albums have sold in huge quantities and some of their songs have become instant classics. Thus this latest release has to maintain a very high standard.

Coldplay polarise opinion. Some people think they are the bees knees whereas others are left totally unmoved. The music is seen as either exciting and melodic or cold and boring. What cannot be denied is that the band has become a very impressive live act, recently being voted top festival band of the year.

This new album follows the well established pattern of the previous ones and will find instant favour with Coldplay fans. The big melodies, hooks and choruses are all here, and overall I would say this is a strong album. The band has certainly retained its song writing ability. No fears that Chris Martin & Co have lost their touch.

There are 14 tracks on the album and 3 of them are short instrumentals which lead into their following track. This is rather strange and pointless - why list this music as separate tracks? The rest of the tracks are vocals with Princess Of China having a guest appearance from Rhianna and Up With The Birds sampling Leonard Cohen.

The music includes faster songs with big choruses which will go down well live e.g. Hurts Like Heaven (excellent song, very catchy and my own favourite), Paradise (already played live) and Charlie Brown (another big song with bucket loads of bass).

Ballads are present, but none of the plaintive voice and piano songs that you might expect. Up In Flames is the nearest you will hear to that. There are other slower numbers but at some point they are mostly swamped by the backing music.

This brings me to my problem with this album. The production is loud and messy on many tracks. The temptation to pile on the electronic music and drown out Chris Martin's voice is never resisted. Far too often you will be hard pressed to hear the sung words and unfortunately the CD booklet does not include them.

The recording seems to have been overly compressed i.e. the dynamic range has been limited, with the result that the music is loud and distorted and lacks light and shade. (I listened to the physical CD and assume that downloads are the same.) Combine that with a very murky musical backing on some tracks and you have a poor listening experience. This is very strange because Coldplay are the kind of band that are crying out for a clear, dynamic recording. Checking the booklet reveals that there were 3 producers, 4 mixers, 17 recording and mix assistants, and "enoxification" by Brian Eno, whatever that means. Clearly a case of too many cooks.

Just before reviewing this album I had been listening to The Resistance by Muse, a band that uses big choruses and loud electronics but can suddenly by turns be very quiet and delicate. The album is dynamic, of excellent audio quality and was produced by Muse with the use of just 1 engineer, 1 mixer, 1 masterer and 4 assistants. It can be done!

I am not condemning this album. Coldplay have given us some great new songs and have maintained their previous standard: no mean feat. Coldplay fans will surely love it. However the recording quality is a disappointment.