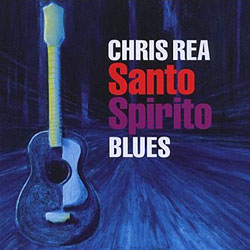 Chris Rea's latest album is available in two physical formats. Firstly, there is the usual single CD album with the 13 new tracks. Secondly, there is a 3 CD and 2 DVD fold-out box set including a 28 page booklet which, at around £14, is remarkable value for money. But is the music as impressive as the packaging?

Chris Rea released his first album in 1978, and up to the year 2000 he made 16 studio albums. The Road To Hell and Auberge both reached No. 1 in the UK and three other albums made the top 10. Single-wise Chris is best known for Fool If You Think It's Over (later a much bigger hit for the underrated Elkie Brooks), Stainsby Girls, Let's Dance, The Road To Hell and Driving Home For Christmas.

During this time Chris Rea became a sell-out live performer and gained a strong following for his brand of rock/pop. He is a superb slide guitarist and possesses a deep, raspy voice which is highly distinctive. His voice is both his strength and his limitation and he is best suited to slow and medium paced music in the lower register.

Following the release of his 16th album, King Of The Beach, in 2000 Chris was taken gravely ill and underwent a life or death operation, which fortunately was a success. This seems to have triggered a whole new outlook on life and Chris announced that he was turning his back on the pop world and would concentrate on his first love, blues music. Also he was not going to perform as Chris Rea and would not sing his old hits. After a dabble under different group names he has seemingly had a change of heart and is once again Chris Rea and performs his old material.

Since 2002 Chris has released 6 original albums, some of which have been elaborate books with several CDs inside. One, Blue Guitars, is a history of blues music with 11 CDs, 1 DVD, a lavish book and a total of 137 songs, all written by Chris Rea. What all these projects have in common is that they feature blues based music.

True blues music has a small following in this country. I think most of us feel that it's OK in small doses but otherwise it all sounds the same, being restricted by the tight structure of the format. I bought the 11 CD set of blues music. I have got to disc 4 so far and will take a long time to listen to all the CDs. It is a very impressive enterprise but a hard slog for the listener.

So it was with some trepidation that I played the new album, Santo Spirito Blues. The good news is that despite the title this is not all blues, about half the tracks harking back to Chris Rea's old style of music. The first 3 tracks are blues and to my ear sound just like all the other blues stuff that has gone before i.e. same guitar sounds, licks and riffs. There isn't anything new or different. However track 4, The Chance Of Love, is the old familiar style of slow ballad with a lovely melody and equal to anything he has done for a long time. This is the stand out cut on the album.

Two more melodic and old style tracks worthy of mention are Think Like A Woman, a slow song with some interesting musical sounds, and Lose My Heart In You, another slow song with a late night jazzy feel.

Not all the bluesy tracks can be dismissed e.g. The Last Open Road, which has a rocky, infectious beat which again is a reminder of the old Chris Rea. This could easily have come from the God's Great Banana Skin album sessions.

I am pleased with this album because it marks the partial return of the old style Chris Rea. It is, however, a mystery why he spent time on making the 5 disc set. The DVDs are of no great merit and I would say a future as a film maker does not beckon. The soundtrack CD for the bullfighting film is classic Spanish guitar music and rather boring. The second film is an art house attempt at the meaning of life and religion. The soundtrack music is surprisingly good and well worth a listen. The last track is a song called Somewhere Between The Stars and is excellent - it should have been included on the main album and would have been a highlight.

Not only has Chris made the music and the films but he has painted all the artwork for the package. This points to what is going on here i.e. Chris Rea is trying to do it all. He should remember that his fans want quality not quantity. Concentrate on the quality and try to get back to writing songs of the standard of The Road To Hell. Just one of those is worth a whole box full of blues tracks.

Overall a good album and, more importantly, one that gives us hope that better is to follow.