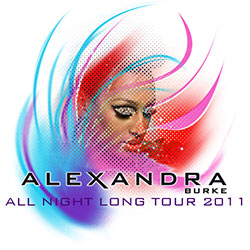 Alexandra Burke, the former winner of X Factor (series 5), has announced details of her debut UK tour, which will take place in early 2011. The huge tour will visit a total of 19 venues around the UK, and gets underway at the Waterfront Hall in Belfast on 18th January. The tour will be known as the All Night Long UK Tour.

Since winning the X Factor back in 2008, Alexandra Burke has enjoyed huge success with her music, including two number one singles and a number one selling album. Alexandra recently released her new single, Start Without You, which marks a slight shift in musical direction, with its reggae sound.

Tickets to Alexandra Burke's debut UK tour go on sale at 9am on Friday 10th September.