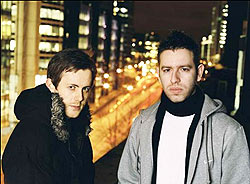 London-based electronic production team, Chase and Status, have announced a tour of the UK this November which will take in three O2 Academies as well as other favourite drum and bass venues throughout the UK. Mixmag have said of the duo '[they are] rocking the living crap out of dance floors across the globe.'

The tour follows their recent support appearance with The Prodigy at the Warriors Dance Festival in Milton Keynes.

Chase and Status have collaborated with several huge artists including Kano, Dizzee Rascal and Plan B the most successful being End Credits which was released in 2009 and reached number one in the UK Dance Chart and number nine in the UK Singles Chart.