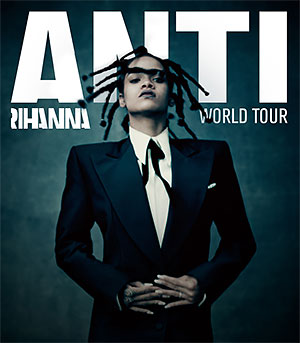 Rihanna has announced a series of huge stadium shows for the UK & Ireland next summer as part of her 'ANTI' world tour. The pop superstar will perform concerts in Coventry, Cardiff, Sunderland, Dublin, London, Glasgow and Manchester in June 2016.

The UK & Ireland shows will form part of next year's European leg of The Anti World Tour.

Canadian singer-songwriter and producer The Weeknd, plus American rapper Big Sean will support Rihanna throughout the European leg of the tour.

Rihanna will play the following UK & Ireland shows during the tour:

Tickets for the UK shows on Rihanna's Anti World Tour will go on general sale at 9am on Thursday 3rd December. Tickets will be available from Ticketmaster.co.uk and other ticket agencies, and will be priced from £50 plus booking fees.