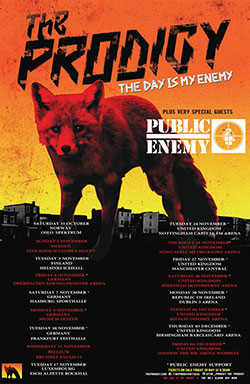 The Prodigy have announced an 8-date UK & Ireland arena tour for winter 2015. The electronic rock trio will visit venues in Nottingham, Newcastle, Manchester, Sheffield, Dublin, Belfast, Birmingham and London during November and December.

The tour follows the release of the group's sixth studio album, The Day Is My Enemy, which reached No.1 in the UK album chart earlier this year.

The Prodigy will perform the following UK & Ireland gigs during the tour:

The Prodigy will be supported by special guests Public Enemy.

Speaking about the upcoming shows, Liam Howlett said: "We are hyped to announce we have our old skool heroes Public Enemy joining us on our UK and European tour."

Tickets for The Prodigy's The Day Is My Enemy arena tour will go on general sale at 9:30am on Friday 29th May. Tickets will be available from Ticketmaster.co.uk and other ticket agencies.