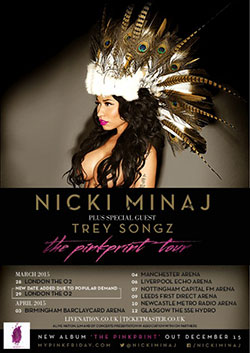 Nicki Minaj has announced a series of UK & Ireland arena dates as part of 'The Pinkprint Tour' next year. The US rapper will play 10 shows across the UK & Ireland in March and April 2015 during the European leg of the tour.

The tour will be in support of Nicki Minaj's third studio album, The Pinkprint, which is due for release next week. The album features the hit single Anaconda, which has earned the singer a Grammy nomination for Best Rap Song.

Nicki Minaj will play the following UK & Ireland shows during The Pinkprint Tour in March and April 2015:

Tickets for Nick Minaj's UK & Ireland tour dates will go on general sale at 9am on Friday 12th December. Members of the Nicki Minaj Fan Club will also have access to a ticket pre-sale from 9am on Wednesday 10th December.