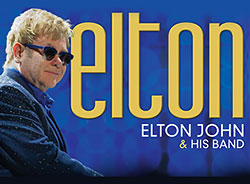 Elton John has announced a short run of UK concerts to take place in June 2015. Elton John and his band will perform four shows at a mixture of indoor and outdoor venues in Gloucester, Walsall, Glasgow and Aberdeen.

First up will be a show at Kingsholm Stadium (home of Gloucester Rugby) on Sunday 7th June. This will be followed by another outdoor show at Banks's Stadium (home of Walsall FC) on Saturday 13th June. Elton will then head north to Scotland for his remaining two shows, which will take place at Glasgow's SSE Hydro Arena on 19th June, and at a specially constructed outdoor arena within Aberdeen's AECC complex on 20th June.

Elton John's UK tour schedule for June 2015 is as follows:

Tickets for Elton John's 2015 UK concerts will go on general sale at 9am on Friday 28th November.