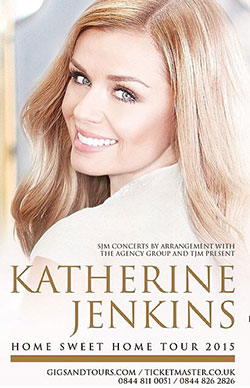 Katherine Jenkins has announced plans for a 21-date UK tour in early 2015. The classical star will be touring in support of her forthcoming album, Home Sweet Home, which marks her tenth anniversary in the music industry.

Speaking about the tour, Katherine said: "Performing live for my fans is what I love most about being an artist. I'm so thrilled to be going on tour next year, getting to see you all and performing my new album. I can't wait."

Katherine Jenkins will perform the following shows during her Home Sweet Home Tour in February and March 2015:

Tickets for Katherine's Home Sweet Home Tour will go on general sale at 10am on Friday 31st October. Subscribers to Katherine Jenkins' mailing list will also have access to tickets via a special pre-sale from 10am on Thursday 30th October.