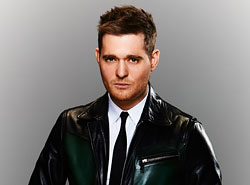 Michael Bublé has announced a 5-date UK arena tour to take place in December 2014. The Canadian crooner will perform live at venues in Newcastle, Leeds, Belfast and London during the tour.

During the past 12 months alone, Michael Bublé has performed live to more than 270,000 UK concert-goers during two sell-out tours! His next UK tour is sure to prove just as popular, especially as it occurs during the run up to Christmas.

Michael Bublé will perform at the following venues in December 2014: