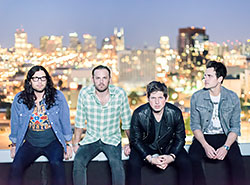 Following the announcement of the band's massive outdoor show at Milton Keynes Bowl next summer, Kings of Leon have today confirmed additional arena shows in Sheffield and Manchester for June 2014.

The Tennessee rockers will perform the Sheffield and Manchester gigs in the week preceding the band's Milton Keynes show - probably using the arena dates as a warm-up for the main event.

Kings of Leon have now confirmed the following UK gigs for the summer of 2014:

Tickets for all three shows will go on general sale at 9am on Friday 13th December.