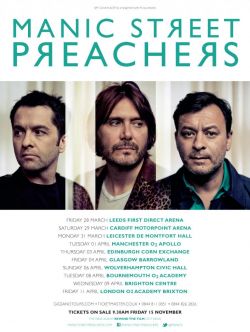 Manic Street Preachers today confirmed that they will undertake a second UK tour in support of their latest album Rewind The Film. The new tour will take place in March and April 2014, and includes two arena shows.

The 2014 UK tour announcement comes after the success of the Manics' recent autumn tour, when they performed a short run of gigs at intimate venues.

Rewind The Film is the Manics' eleventh studio album. It was widely praised as being one of their best albums following its released in September.

Manic Street Preachers will perform the following dates on their 2014 UK tour:

Tickets for the Manic Street Preachers 2014 UK tour will go on general sale at 9:30am on Friday 15th November. A fan only pre-sale will also take place from 9am on Wednesday 13th November. See the band's official website for further details.