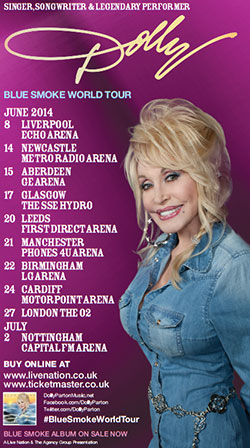 Dolly Parton has announced that she will visit the UK & Ireland during the summer of 2014 to perform a series of huge concerts. The concerts will be performed during the European leg of the iconic singer-songwriter's 'Blue Smoke World Tour'.

The tour will be in support of Dolly's upcoming studio album, Blue Smoke, which is due to be released worldwide on Dolly Records.

Speaking about the tour, Dolly commented: "Every time I come to Europe I'm just as excited as I was my very first time, which was many, many years ago. I love that part of the world and I especially love the fans. We always have such a good time and I've put together a lot of things for this show that I think the fans will love. We had not planned to come back so soon, but we got so much fan mail and such a great reaction that I thought 'Well, why not. If they're having a good time and we always do, let's just do it'."

Dolly Parton will perform the following UK & Ireland dates during the tour: