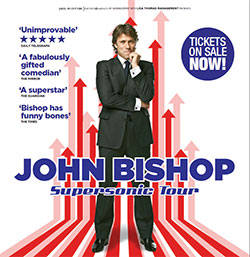 John Bishop has announced his return to the live comedy circuit with a brand new arena tour planned for late 2014. The Liverpudlian comedian has been away from the comedy circuit for the past 18 months, while he wrote his autobiography.

John's latest stand-up tour is titled Supersonic and it will see him whizz around the UK & Ireland, performing more than 30 dates in 15 different venues from October to December next year.

John's previous stand-up tours include Sunshine (2011) and Rollercoaster (2012), which were both sell-out tours.

The schedule for John Bishop's Supersonic 2014 arena tour is as follows:

Tickets for John Bishop's 2014 Supersonic arena tour will go on general sale at 9am on Thursday 24th October. Venue pre-sales will be begin a day earlier at 9am on Wednesday 23rd October.

John Bishop's autobiography, How Did All This Happen?, is published by Harper Collins and is out now.