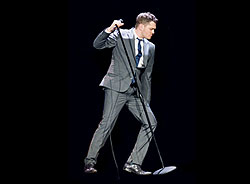 Michael Bublé has announced plans for a UK arena tour to take place in March 2014. The chart-topping Canadian singer will perform shows in Manchester, Glasgow and Birmingham during his 7-date tour of the UK.

The tour will be in support of Michael's latest album, To Be Loved, which was released in April 2013. It was Michael's eighth studio album, and it became his third UK No.1 album after it shot straight to the top of the chart.

The schedule for Michael Bublé's 2014 UK Arena tour is as follows:

Interestingly, the tour does not (yet) include a London date. Michael Bublé staged a 10-date residency at the O2 Arena in London earlier this year, so perhaps he is now just focussing his attention on the rest of the UK.

Tickets for Michael Bublé's 2014 UK Arena tour will go on general sale at 9am on Friday 20th September. A special pre-sale for O2 customers will also take place from 9am on Wednesday 18th September.