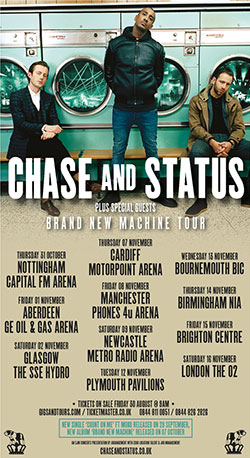 Chase and Status have announced plans for their first ever UK arena tour - to take place later this year in October and November. The electronic production duo will perform a total of 11 dates during their 'Brand New Machine' UK tour.

The duo's third studio album, Brand New Machine, is due to be released ahead of the tour on 7th October.

The tour begins on Thursday 31st October, with a show at Nottingham's Capital FM Arena, and concludes on Saturday 16th November, with a huge show at London's O2 Arena.

The full list of venues and dates for the tour is as follows:

Tickets for the 'Brand New Machine' UK tour will go on general sale at 9am on Friday 30th August.