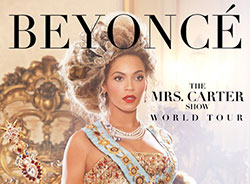 Following her spectacular performance at last night's Super Bowl half-time show, Beyoncé has announced plans for a new world tour, which includes several UK and Ireland arena shows scheduled to take place in April and May of this year.

Beyoncé's latest concert tour will be known as The Mrs Carter Show World Tour - in reference to her married name. The tour will begin in mainland Europe, with shows planned for Serbia, Croatia, Slovakia, Holland and France, before it crosses the channel to the UK in April.

The Mrs Carter Show World Tour will visit the following venues in the UK and Ireland:

Beyoncé last toured the UK in 2009 during her I Am... World Tour. Beyoncé's latest concert tour is said to be her most ambitious undertaking to date, and will be bigger in scope than any of her previous shows

Tickets for the UK dates on The Mrs Carter Show World Tour will go on general sale at 9:30am on Saturday 23rd February. Tickets for the Dublin dates go on sale at 9am on Monday 11th February. There will also be a pre-sale for members of Beyoncé's Beyhive Blog, which fans can join for free at www.beyonce.com.