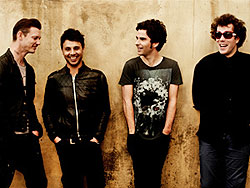 Stereophonics have announced a new UK tour planned for March 2013. The band will use the low-key tour of intimate venues to road test tracks from their upcoming eighth studio album - Graffiti on the Train.

Graffiti on the Train is due to be released in early March, before the band's UK tour gets underway. The first single to be taken from the new album - a track called Indian Summer - will be released on 25th February and features a video directed by Kelly Jones (see video below).

Stereophonics will perform at the following venues during the band's March UK tour:

It is expected that the band will also announce a larger UK arena tour later in the year.

Tickets for the Stereophonics March 2013 UK tour will go on general sale at 9am on Friday 25th January.