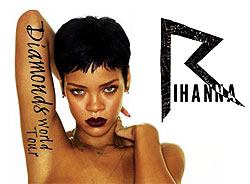 Rihanna has announced a series of UK stadium and arena shows as part of her 'Diamonds World Tour' in 2013. The pop superstar will perform concerts in Cardiff, Manchester, London, Birmingham and Sunderland during June next year.

Diamonds was the first single to be taken from Rihanna's soon-to-be-released seventh studio album, Unapologetic.

Rihanna worked with David Guetta during the recording of Unapologetic, and the French DJ will support Rihanna during her shows in Cardiff, Twickenham and Sunderland.

The venues and dates for the UK leg of Rihanna's 'Diamonds World Tour' are as follows:

Tickets for Rihanna's UK tour dates will go on general sale at 9am on Tuesday 20th November. Fans will also have the chance to pre-order Rihanna's new album with their concert tickets.