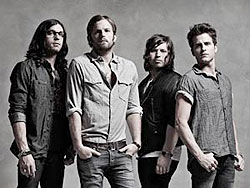 Kings of Leon will visit the UK during the summer of 2013 for a series of arena shows. The band announced a total of 6 UK shows - taking place in London, Manchester and Birmingham - as part of a wider European tour.

The Tennessee-based rockers are expected to have released their sixth studio album by the time they arrive in the UK for their summer shows. The new album will be the follow-up to 2010's Come Around Sundown.

Kings of Leon last toured the UK during the summer of 2011 when they performed at stadiums across the country. British fans will have waited a full 2 years by the time the band returns to perform again next summer.

Tickets for Kings of Leon UK tour dates will go on general sale at 9am on Friday 9th November.