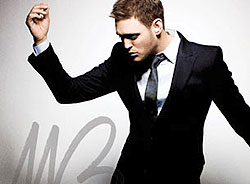 Michael Bublé will arrive in the UK next summer for a series of shows at the O2 Arena in London. The Canadian singing sensation has a 6 night residency planned at the O2 Arena, beginning 30th June and ending 7th July.

With a capacity of 20,000, Michael Bublé is likely to perform to around 120,000 fans during his 6 night stint at the O2 Arena. The exact dates are as follows:

Michael Bublé hasn't performed in the UK since 2010, when he completed the UK leg of his Crazy Love tour, so all roads will lead to London for his British fans next summer!

Tickets for Michael Bublé's O2 Arena shows will go on general sale at 9am on Friday 2nd November. A pre-sale will also be available to members of Michael's Official Fanclub Bungalow-B and also O2 Priority customers from 9am on Wednesday 31st October.