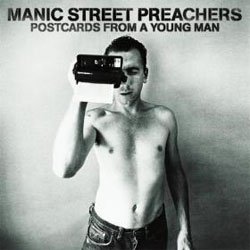 The Manics Announce 'Postcards From A Young Man' Tour

The Manic Street Preachers will be releasing their tenth studio album Postcards From A Young Man in September. The album's release will be closely followed by a huge tour around the UK.

The Manics' website claims that the Autumn tour will be their most extensive UK tour to date. Indie rockers - British Sea Power - have been lined up to provide the support on tour.