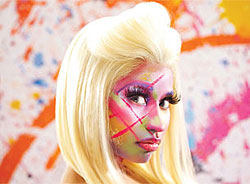 Nicki Minaj has announced plans for a new UK tour to take place later this year. The Trinidadian-born rapper, who recently performed at the Hackney Weekend festival, will return to these shores again in the autumn for a series of arena shows.

The European leg of Nicki's Pink Friday tour began earlier this month but only includes a handful of UK dates. With those dates now totally sold out, Nicki's fans will be pleased to hear that she plans to return later in the year for a much bigger UK arena tour.

Nicki Minaj's second studio album, Pink Friday: Roman Reloaded, was released in April and went straight to number one in the UK chart.

Tickets for Nicki Minaj's UK arena tour will go on general sale at 9am on Friday 29th June.