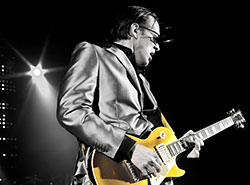 Joe Bonamassa, one of the greatest blues guitarists of his generation, has announced plans for a UK arena tour in March 2012. Joe is already due to perform a series of concerts in the UK this autumn, but next year's tour will be a much larger affair taking in several of the UK's biggest arenas.

Joe's last album, Dust Bowl, came out in March 2011 and reached number 12 in the UK chart. It's been reported that Joe has already begun work on a new album, so it's highly likely that he'll have new material to perform to his British fans when he returns to the UK again next year.

Tickets to see Joe Bonamassa on his 2012 UK tour will go on general sale at 9am on Friday 7th October.