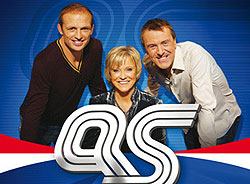 Last year the popular TV sports quiz, A Question of Sport, celebrated its 40th anniversary by taking a live stage version of the show on a UK-wide tour. The live tour proved to be a huge success, so it's no surprise to hear that it will be touring again later this year. A Question of Sport Live will visit 19 cities around the UK as part of the latest tour, which will take place between 22nd October and the 20th November 2011.

Tickets for A Question of Sport Live Tour will go on general sale at 9am on Friday 11th March.