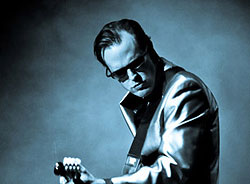 Joe Bonamassa, once described by Guitarist Magazine as the 'the new king of blues', has announced details of a UK tour to take place in October. The highly regarded American guitarist and singer-songwriter will be touring the UK in support of his latest album, Dust Bowl, which is due to be released next month.

Joe Bonamassa will perform a total of six dates in the UK; starting at Blackpool Opera House on the 15th October and then visiting Nottingham Arena (16th), Cardiff CIA (18th) and Plymouth Pavilions (19th), before ending with two dates at the Hammersmith Apollo (21st & 22nd).

Tickets to see Joe Bonamassa on his October UK tour will go on general sale at 9am on Wednesday 2nd March.