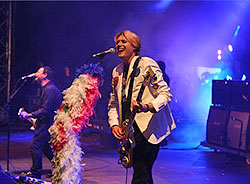 The Manic Street Preachers have announced details of three UK tour dates to be performed in May as a warm-up for the festival season. The dates include a gig at the Cardiff International Arena, which will be the Manics' first headline show in Cardiff since 2007, something that the band are really looking forward to.

The Manic Street Preachers will start their short UK tour at Venue Cymru in Llandudno on 18th May, followed by a gig at Wolverhampton Civic Hall on 19th May and ending with a gig at the Cardiff CIA on 21st May. Fellow Welsh band, The Joy Formidable, will support the Manics on all three dates.

Tickets for all three shows will go on general sale at 9am on Friday 18th February.