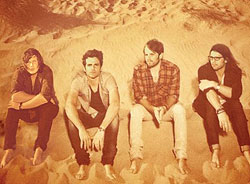 Kings of Leon Reschedule O2 Arena Gig For The Summer

The Kings of Leon have announced that their cancelled pre-Christmas O2 Arena gig has been rescheduled for the summer, and will now take place at the O2 Arena on Monday 20th June.

The Kings of Leon had been due to end their European tour with a huge gig at the O2 Arena in London just before Christmas. However, a fire on board one of the band's tour buses caused so much disruption that it was not possible to go ahead with the show, which left the many fans who had travelled to London very disappointed.

The band have confirmed that all valid tickets bought for the original O2 Arena gig will also be valid for the rescheduled concert in the summer.

The rescheduled date will fall right in the middle of the Kings of Leon summer tour, which will see the band play several stadiums across the UK, plus two huge gigs at London's Hyde Park.

Update 18th March 2011: The rescheduled concert has had to be rescheduled again! Kings of Leon will now perform at the O2 Arena on the 1st June and not the 20th June, as was previously announced.