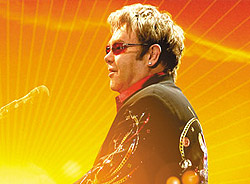 Sir Elton John announced recently that he would be performing at three open-air venues across England. Elton will be starting the tour in Shrewsbury on 12th June 2011, travelling to Northants Cricket Ground on 25th June and finally appearing at Sussex Cricket Ground on 26th June.

The open-air venues will have additional seating brought in for the concerts so there will be plenty of tickets available for all the Elton John fans out there.

Update 3rd November 2010 Elton John has announced that before his summer stadium tour gets underway, he will perform a couple of warm-up concerts. The extra dates have been announced for the Cardiff CIA (8th June) and Glasgow SECC (10th June). Tickets for the two extra concerts will go on sale at 9am on Friday 5th November.

Update 11th November 2010 An extra show at the Cardiff CIA has been announced for the 9th June, which means that Elton John will now be performing two dates in Cardiff.