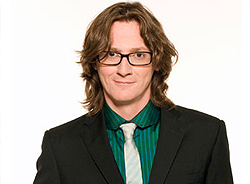 Irish funnyman, Ed Byrne, has announced a new UK tour that will see him appear at some larger venues including the Manchester Apollo and AECC. Bringing his usual intellectual humour, Ed will be pleasing the crowds in this scheduled tour.

Ed's appearances on Mock the Week and 8 Out of 10 Cats have been notable and have given him plenty of exposure.

Tickets are now on sale for Ed Byrne's tour.