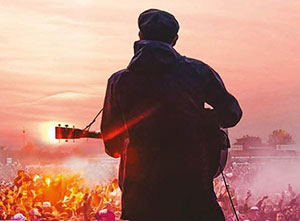 Gerry Cinnamon has announced a string of UK summer shows for 2020 – in support of his upcoming second album The Bonny. The Scottish singer-songwriter will play live at Birmingham's Resorts World Arena on Friday 29th May as part of the tour.

Tickets to see Gerry Cinnamon live on tour at the Resorts World Arena went on general sale on Friday 6th December, priced from £22.50 plus fees.