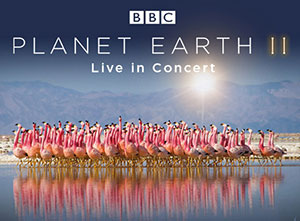 Planet Earth II Live in Concert will be touring the UK's biggest arenas during the spring of 2020. Audiences can expect a spectacular evening of film and live music when the production arrives at Manchester Arena on Friday 27th March.

Hosted by TV presenter Liz Bonnin, the concert will feature breathtaking, specially-selected footage from the TV series accompanied by a live orchestra.