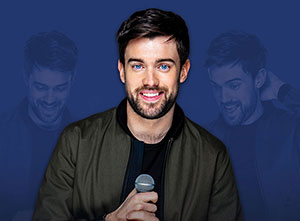 Jack Whitehall is heading back out on the road in 2019 with his biggest ever arena tour. The award-winning stand-up comedian will perform his new show – Stood Up – at London's O2 Arena on Sunday 15th December as part of the tour.

This show is in addition to the three earlier shows at the O2 Arena.

Tickets to see Jack Whitehall live on tour at the O2 Arena went on general sale on Friday 1st March, priced from £20 plus fees.