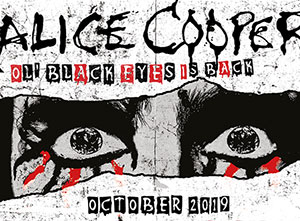 Alice Cooper will thrill audiences across the UK during the autumn of 2019. The king of shock rock will play a show at London's O2 Arena on Thursday 10th October as part of his Ol' Black Eyes Is Back 50th anniversary tour.

The Stranglers and MC50 will support Alice Cooper in London.

Tickets to see Alice Cooper live on tour at the O2 Arena went on general sale on Friday 22nd February, priced from £40 plus fees.